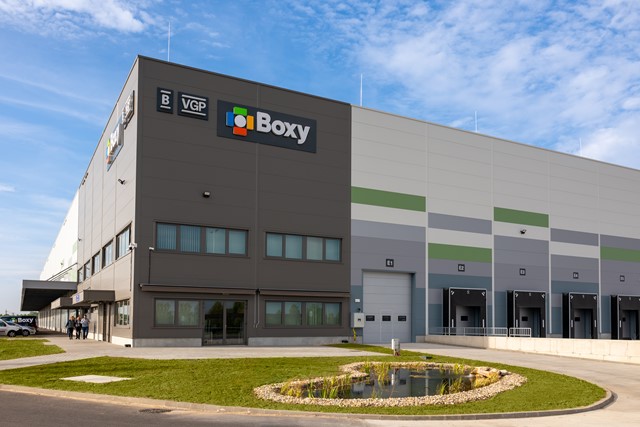 Budapest, 2022 13th of October – The first phase of VGP Park Budapest Aerozone in Üllő has been completed, the European company that develops, manages and owns high-quality logistics and semi-industrial real estate has handed over a 10,000 m2 warehouse building to Boxy Logisztikai Zrt. The building’s design has been adapted to robot technology, features a continuous, dilation-free industrial floor, office space, rest rooms and also a garden pond.

Following the handover, the entire industrial complex is planned to be completed in 3 further phases, with a further 50,000 m2 of buildings being designed and constructed by VGP's Hungarian team. The Budapest Aerozone Park, located on the border of Üllő and Vecsés, right next to the M0 ring road and at the junction of the M4 motorway, is the company's first Hungarian project close to an airport.

"The park is part of the Eastern industrial region of Budapest. Its proximity to the airport and motorways is of particular importance, as it offers easy access to both major cities in Hungary and to the main destinations in the surrounding countries. It is an ideal location for logistics service providers and commercial and manufacturing warehousing companies," says Károly Pálovics, VGP's country manager for Hungary.

The customer, Boxy Logistics Zrt's new parcel fulfillment centre uses robots to serve the orders of webshops, so special attention was paid to the design of the floors, which included continuous, smooth surfaces and an interior design adapted to new technologies. The project is aiming to attain the BREEAM Very Good certificate.