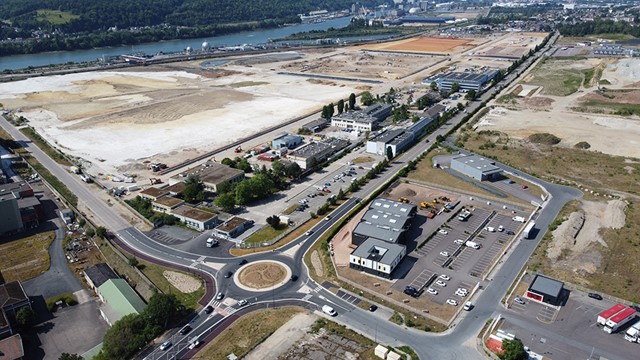 VGP announces the signature of its first acquisition project in France, with VALGO

June 30, 2022, 18:00 CET, Petit-Couronne, France: VGP NV (“VGP” or “the Group”) and VALGO signed an agreement to purchase 32 hectares of land that housed the former Petroplus refining units in Petit-Couronne, near Rouen. This brownfield rehabilitation project is fully in line with VGP's core expertise and strategy. Thanks to the six years ownership of the site by VALGO and its expertise in asbestos removal, soil and water table decontamination, in-situ waste treatment and development, this area has now become a suitable site for the development of new industries and business activities.

On the banks of the river Seine and close to the A13 highway, the 32-hectare area of land offers its future users a highly strategic location. Following the extensive depollution work carried out by VALGO, the site is now ready for redevelopment. VGP expanded into France only a few months ago and is delighted to start its French business activities in the dynamic Rouen Normandy metropolis area, via this major project. In total, around 150,000 m² of land are set to be redeveloped to accommodate industrial and logistics projects, with work due to begin in 2023.

Collaboration with local authorities is an absolute priority for the Group, since development projects directly impact their surroundings. In Petit-Couronne, the revitalization of this brownfield site will therefore be an opportunity to help stimulate the area in terms of employment and so meet the economic and environmental challenges of the Rouen region. Aurélien Coudert, General Manager of VGP France, is delighted that the Group’s first steps in France are being taken in partnership with VALGO and is convinced by the attractiveness of the region and its development potential.

VGP and VALGO are also joining forces to implement an ambitious and innovative environmental policy. Through a policy of innovation serving clients and geographies, VGP puts the challenges of energy efficiency, carbon footprint reduction and sustainable buildings at the heart of its projects. The company is committed to being carbon neutral by 2025 and is also aiming for BREEAM Excellent building certification, as well as green energy production on its projects. In addition, the VGP Foundation, created in 2019, already supports 29 projects that address issues around access to education, biodiversity preservation and the protection of cultural heritage.

“VGP is delighted to begin its business activities in France on a site as exceptional as this one, with strong economic and environmental ambitions that are shared by both our partner, VALGO, and the local authorities. As the rehabilitation of brownfield sites is at the heart of our business, this project is a great opportunity for us to deploy our industrial and logistical know-how. The uncertain geopolitical situation and the rise in transport prices mean that companies are increasingly looking for local support to start their business. In this context, we strongly believe in the relevance of our integrated model with a long-term vision. We are now eager to get to work and bring all the expertise of the Group to the project."

"We are delighted that this huge piece of land has been sold to a major investor with experience in redeveloping brownfields in Europe. However, I would first like to celebrate the work of the men and women who worked so hard to make this colossal project a success. It took more than 1 million hours and over €60 million in investment by VALGO to turn the page on over 80 years of refining on this site, which already employs 600 people.”

VGP is advised on this project by the legal practices Cheuvreux (Eric Hervy), Ireo (Marine Javelle) and EOL (Jean-François Mounic).